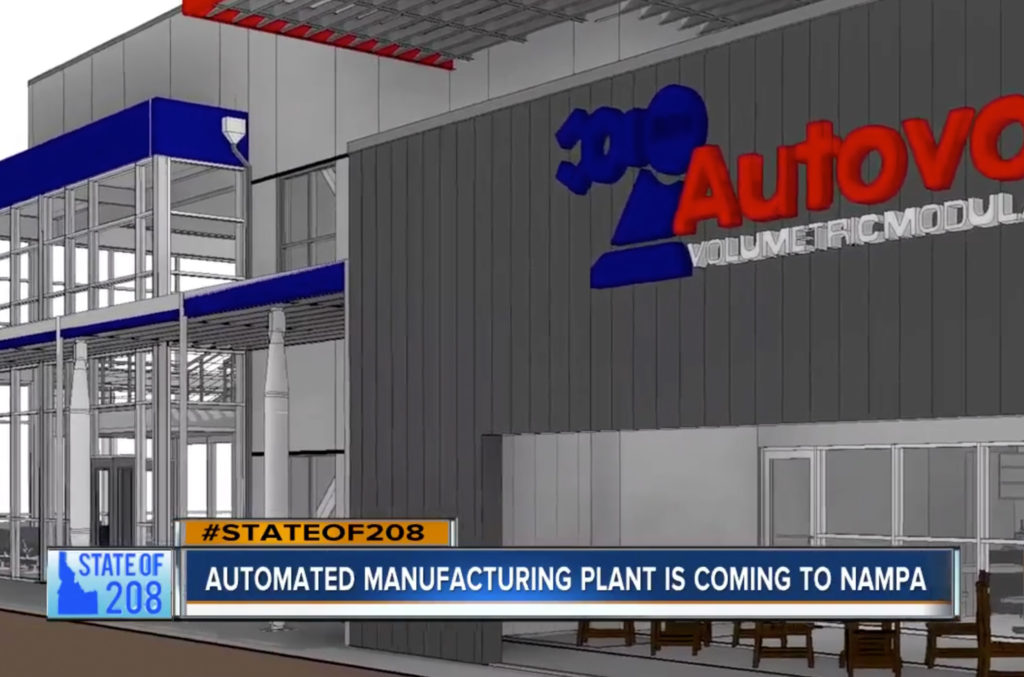 Autovol: a “first of its kind” automated manufacturing factory comes to Nampa

NAMPA — If you’re driving along Star Road in Nampa over the next few months, you’ll start to notice some big changes; like a 400,000 square foot building going up near the cheese factory.

If you’re driving along Star Road in Nampa over the next few months,
you’ll start to notice some big changes; like a 400,000 square foot
building going up near the cheese factory.

The name of the company that will be housed in the building is Autovol, an automated manufacturing plant on track to be finished in January of 2020, that will soon work to combat the affordable housing crisis across the Western U.S.

Its founders are experts in the modular construction business, with ties to the Treasure Valley through their former company, Prefab Logic.

It is a company with plans to build high-volume, multi-unit housing complexes, like apartments and hotel rooms, in house, as individual modules.

“It’ll be the first of its kind in the type of automation that we’re going to build with, from automated machinery to robotics,” said Murdock.

In this day and age, we’re no strangers to robotic assembly lines. Your car was likely built, in part, by artificial intelligence. But until recently, your home rose by human hands.

The robots will be programmed to follow all processes and codes in order.

But the company is not ruling out man-made completely; there are human inspections all along the way. Then, after assembly, each module will be completed by humans who will install all wiring, plumbing, and final fixtures, before shipment to the building site.

“With our automation and what we’re doing with modular construction, we’re looking to cut 20% of the cost out and save up to 30% of the time in building,” said Murdock.

They’ve set a goal of building eight modules each day, which amounts to nearly 6,500 square feet.

“One of the advantages of modular construction is, while I’m building the modules and the pieces for this building we’re going to be building, they can be doing all of the onsite work at the same time,” said Murdock.

Another advantage the company has is building without weather hampering the process. But, why here in the treasure valley?

It’s an effort to combat the affordable housing crisis in multiple states.

“The demand is at an all-time high. Affordable housing is an issue everywhere in the United States. We’re trying to get people into a place that they can actually afford, and live comfortably, and we believe this is a good way to do it,” said Murdock.

Murdock says Autovol also has plans for bringing well-paying jobs to the area, expecting that most everyone they hire will come from within the Treasure Valley. He said they plan to hire a graduated increase of people, starting out with around 180 employees, and gradually increasing to 300 employees. Rick Murdock says he does not believe in the separation between management and employees, which is why they are building breakrooms in a way that both positions will share them.

Autovol is being built in part by ESI Construction, a Boise based company.